Antony Lentin: the Rise and Fall of Sir Edgar Speyer 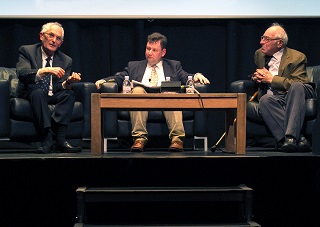 Sir Edgar Speyer was a much admired US-born philanthropist who, among his many contributions, founded the Whitechapel Art Gallery, financed the construction of new tube lines, and rescued the Proms from collapse. Shortly after the outbreak of WWI, however, Speyer was accused of being a spy. In Banker, Traitor, Scapegoat, Spy? Antony Lentin outlines Speyer’s dramatic rise and fall: a moral tale that encapsulates the tragedy and injustice of war. He examines Speyer’s enigmatic life with Sir Louis Blom-Cooper and Simon Kinder, a spy-enthusiast.

Sir Louis Blom-Cooper is a leading figure in public law and renowned human rights advocate. His latest book is Power of Persuasion: Essays of a Very Public Lawyer.

Antony Lentin is a senior member of Wolfson College, Cambridge, a barrister and former history professor for the Open University. His books include Lloyd George and the Lost Peaceand General Smuts.

Simon Kinder is deputy head at Gresham’s School, where he teaches history. He has a particular interest in espionage linked to the Gresham spies such as Donald Maclean and Cedric Belfrage.