Discovering her close friend and boss was a conman prompted Alice Sherwood’s lifelong interest in authenticity and identity, topics she explores in her award-winning book, Authenticity: Reclaiming Reality in a Counterfeit Culture. With a rich range of stories, many of which – from the world’s greatest impostor, the human chameleon who inspired Woody Allen’s Zelig, to the Bronx-born designer accused of copying by a French couturier – explore some of the complexities of the Jewish immigrant experience, she argues for a new understanding of what it means to be authentic. Alice is in conversation with Simon Schama, whose two volume The Story of the Jews explores the ambiguities of Jewish identity from 5th century BC Egyptian Israelites to the Marrano diaspora. 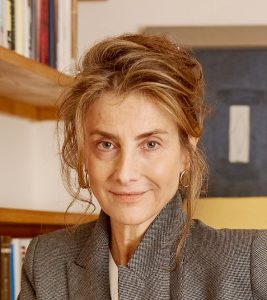 Alice Sherwood is the author of the award-winning Authenticity: Reclaiming Reality in a Counterfeit Culture (HarperCollins 2022), which argues that although our counterfeit culture is shaped by the most powerful forces of evolution, economics and technology, we can still come together to reclaim reality. Currently a Senior Visiting Research Fellow at the Policy Institute at King’s College London, she also sits on the board of an open source intelligence company, chairs the Rising Tide women’s network, and has served as a trustee of the Hay Festival Foundation and the London Library.