Maverick director and writer Mike Leigh has had a huge impact on British cinema and theatre. Salford born, he loves to describe ordinary lives, achieving a body of work far from ordinary.  Whether for the stage or the screen, he has developed a unique style of authorship: he assembles a few actors, weeks of long conversations evolve through secret rehearsals into creating the characters and the final story. His triumphant return to the stage with Two Thousand Years saw him address Jewish identity for the first time. 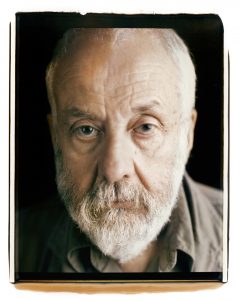 Born in Salford, Manchester, in 1943, Mike Leigh has developed a unique method of creating films through controlled improvisations. After his debut feature film, Bleak Moments (1971) he made a succession of admired TV plays, then returned to feature films. Secrets and Lies won the Palme d'Or at Cannes in 1996. Topsy-Turvy (1999) won two Oscars, and Vera Drake (2004), won the Golden Lion at the Venice Film Festival. He also did Two Thousand Years for the National Theatre in 2005. Image cr. Myrna Suarez