The Food of Spain

Claudia Roden spoke about discoveries she made while researching her new book The Food of Spain. Until the mid 20th century 80 percent of the population in Spain lived and worked on the land which was owned, for the most part, by the Church and nobility, and the cooking reflects the old lives of the very poor peasantry, the clergy and the aristocracy. “In this country of extraordinary geographic diversity with a patchwork history, the gastronomy is also amazingly suffused by legacies from the past, especially the Muslim and Jewish past, which is a sensitive subject that arouses passions.” 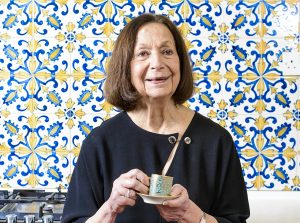 Claudia Roden is a food writer with a special interest in the social, cultural and historical background of food. She is based in the UK. Roden grew up in Cairo, went to school in Paris and came to London to study art. She revolutionised Western attitudes to Middle Eastern cuisines with her bestselling A Book of Middle Eastern Food in 1968 and went on to publish multiple bestsellers including the international award-winning The Book of Jewish Food. She is president of the Oxford Symposium on Food and Cookery and an Honorary Fellow of SOAS and UCL Universities.
Her latest book Med is her most personal - of remembered people and places, glorious food and magic moments in her travels around the Mediterranean, what she cooks today for family and friends.
Image cr Jamie Lau, Waitrose & Partners Food