The Island of Extraordinary Captives

How did creativity flourish during one of our most shameful wartime missteps? In May 1940, faced with a country gripped by paranoia, Winston Churchill ordered the internment of all German and Austrian citizens living in Britain, around 30,000 in total, most of whom were refugees who had come to the country to escape Nazi oppression. They were now imprisoned on the Isle of Man by the very country in which they had staked their trust; to this day there has been no apology to the thousands of refugees imprisoned without fair trial.

Painstakingly researched from dozens of unpublished first-hand accounts and previously classified documents, The Island of Extraordinary Captives: A True Story of an Artist, a Spy and a Wartime Scandal tells, for the first time, the story of history’s most astonishing internment camp. In these challenging circumstances a group of world-renowned artists, musicians and academics, now seen as ‘enemy aliens’, turn a prison into a university, cultural centre, art gallery, broadcasting station, fitness club, engineering school and concert amphitheatre. But is there really a Nazi spy in their midst?

Award-winning journalist and author of A Game of Birds and Wolves Simon Parkin joins us online to reveal the untold story of a battle between fear and compassion at a time of national crisis.

Click here to buy a copy of Island of Extraordinary Captives

The event previously advertised at this time, Henrietta Szold, has unfortunately been cancelled. 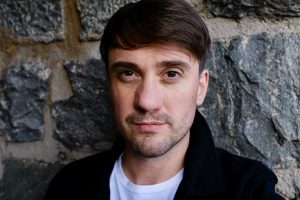 Simon Parkin is an award-winning British writer and investigative journalist. He is the author of  A Game Of Birds And Wolves, which told the little-known story of a small group of women in Liverpool who devised a war game which went on to be the thing that won the Battle of the Atlantic, and has been bought for film by Steven Spielberg. He lives in West Sussex.