Writing to Change the World

Here were three writers not afraid to tackle serious issues: racism and homophobia, the right to die, the meaning of art, the absurdity of cycles of vengeance, faith and religion – and much more. Their novels are gripping, generous and thought provoking. They discussed the role of literature and its impact on our lives. 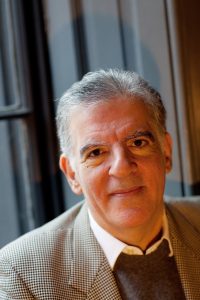 Amanda Craig is a British novelist, short-story writer and critic. She reviews children’s books for The New Statesman and also writes for the Guardian, the Telegraph and the Observer. Her novel, The Lie of the Land, has been optioned for a TV series by Baby Cow Productions. Amanda’s eighth novel, The Golden Rule, was published by Little, Brown in 2020.
Moris Farhi

Moris Farhi was born in Turkey. He is a celebrated playwright and screenwriter, and the author ofChildren of the Rainbow, Young Turk, Journey Through the Wilderness and his latest novel, A Designated Man. He has chaired the Writers in Prison programme for both English and International PEN.