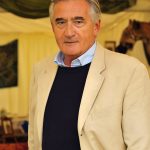 Antony Beevor is one of the world’s foremost historians, whose books have appeared in more than 30 languages, sold more than six million copies, and topped the international bestseller lists. They include Stalingrad, which won the Samuel Johnson Prize,Berlin: The Downfall and The Second World War. His latest book is Ardennes 1944: Hitler’s Last Gamble. Image cr.  John E Fry
Past event

Vasily Grossman, author of Life and Fate, is considered one of the unsung geniuses of the twentieth century. Antony Beevor’s fascination with Grossman was triggered whilst researching his masterly book on Stalingrad. It led him to edit A Writer at War, a compilation of the great novelist’s astonishing wartime notebooks and journalism.

History’s People
The George Webber Memorial Lecture Professor Margaret MacMillan interrogates the past with fellow-historian Antony Beevor to consider the role of individuals and their behaviour. In her thought-provoking new book, History’s People: Personalities and the Past, Margaret MacMillan considers the impact of character and personality on historical events, analysing the interplay between individuals and their worlds, from Roosevelt to Nixon, Lor...
Read More
Previous Contributor Next Contributor