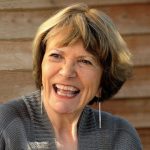 Joan Bakewell is an author, journalist and broadcaster. She is presenter of BBC Radio 3’s Belief series and BBC Radio 4’s Inside the Ethics Committee. Her books include her autobiography The Centre of the Bed and, most recently, Stop the Clock. She is President of Birkbeck College, University of London and a Member of the House of Lords. Image c. Colin Bowerman
Past event

We Had It So Good

Linda Grant spoke to Joan Bakewell about her new novel, We Had It So Good, which takes us from the late 60s to today, following the lives of a group of friends from youthful idealism to middle-class successes, until the events of late middle-age and the new century force them to realise that their fortunate generation has always lived in a fool’s paradise.