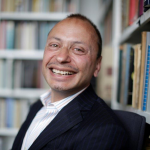 Dr Daniel Wildmann is a historian and film scholar. He is Acting Director of the Leo Baeck Institute London and Senior Lecturer in History at Queen Mary, University of London. His research areas are Modern German-Jewish History, the history of the Third Reich, the history of the body, the history of masculinities and film, antisemitism, and emotion. Daniel Wildmann is currently working on a new project entitled A history of visual expressions of antisemitism, emotions and morality. This project, using Germany as an example, will investigate visual products such as postcards, films and TV productions since the silent movie era.
Past event

On the Eve: The Jews of Europe before the Second World War
This is the portrait of a world on the eve of its destruction. Bernard Wasserstein presented a disturbing interpretation of the collapse of European Jewish civilization even before the Nazi onslaught. He showed how the harsh realities of the age devastated the lives of communities and individuals. By 1939, the Jews faced an existential crisis that was as much the result of internal decay as of external attack. Ranging from Vilna (‘Jerusalem of Lithuania’) to Salonica with its Judeo...
Read More