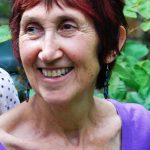 Michele Hanson is the author of a memoir What the Grown Ups Were Doing. Age of Dissent, Treasure and What Treasure Did Next were all originally published as a column in The Guardian. She has also written the poignant, often very funny, book of recollections: Living With Mother.
Past event

To celebrate the launch of the anthology, For Generations: Jewish Motherhood, we went beyond the stereotypes and looked at the contemporary experience of being a Jewish mother with some of the best writers on the subject: Sally Berkovic, who writes about being both orthodox and feminist; Kate Figes, whose books on the realities of parenting are required reading; and Michele Hanson, whose Guardian columns have brought humour to the trials of daily motherhood.

Read More
Mamma Mia! or The Joys of Family!
This was a hilarious session on parents and children, fiction that reads like real life and true stories so incredible they read like fiction. Be among the first to hear excerpts from Olivia Lichtenstein’s soon to be published new novel, Naked Yoga. We found out what happened when William Sutcliffe’s three fictional mothers, all dreaming of becoming grandmothers, descend on their 30-something sons. And discovered what it means to be brought up by parents obsessed with celebrity like Cosmo...
Read More

What the Grown-Ups were Doing
We embarked on an odyssey through 1950’s suburbia –a Metroland of neat lawns, bridge parties and Martini socials through the eyes of an ‘oddball tomboy’. As well as the awkwardness of late childhood, Michele Hanson also has to contend with a mother who requires daily updates on bowel movements and remains loudly suspicious of the domestic and personal habits of all the neighbours. This was a hilarious and intensely evocative storytelling which affectionately captured suburban B...
Read More