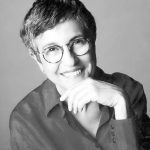 Irma Kurtz joined Cosmopolitan as agony aunt in 1972 and has been there ever since. A regular on BBC Radio 4 (for which she wrote and presented a 10-part series, Mediterranean Tales), she has written three self-help books, two novels and three travel books.
Past event

Read More
Nice Jewish Gurus
From agony aunts to lifestyle gurus, the Jewish commitment to self-improvement and fulfilment cannot be underestimated. Irma Kurtz is one of Britain’s leading agony aunts, guiding readers for almost 30 years through the emotional thickets of contemporary life. Carole Caplin urges us in her new book Lifesmart towards an aspirational, holistic approach to self-fulfilment. And Lynne Franks’ mantra is “Be All You Were Born to Be,” combining journeys to inner tru...
Read More
Travels in the Third Age
Frank, funny and telling it like it is Maureen Lipman and Irma Kurtz shared their outlooks on the passing of years. Lipman’s Past-it Notes recalls the adventures and misadventures of a career which has spanned more than 40 years and is only getting more interesting -her most recent role involved abseiling down a twenty-foot tree carrying a chainsaw. Following the exploration from Then Again: Travels in Search of My Younger Self, About Time, Kurtz proves herself a fearless investigato...
Read More

True Tales?
For the first time, JBW commissioned new work; storytelling with a common theme. We entitled this evening ‘True Tales?’ and selected some of our favourite writers who presented works of either truth or fiction. The tales were themed ‘Imprints of Home and Exile’. Throught the evening the writers offered suggestions of what remains when we leave home; which aspects of home leave us and which do we carry with us? Then they turned to the audience to vote on whether the story they j...
Read More

In conversation with Irma Kurtz, Arlene Heyman, New York psychoanalyst and Bernard Malamud’s muse, introduces her debut collection of short stories, revealing what really goes on in people’s minds, relationships and their beds. Raw, tender, funny, truthful and often shocking, Scary Old Sex is a fierce exploration of the chaos and beauty of life.