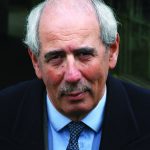 Tom Bower is an acclaimed investigative journalist and best-selling biographer, author of 24 books including Nazi Gold, and the lives of Robert Maxwell, Richard Branson, Tony Blair, Prince Charles and Jeremy Corbyn.
Past event
The Ethics of Biography
Biography is one of the great literary growth areas, reaching a huge number of readers. But how do authors deal with the scandals, rivalries, secrets and lies they may come across in the course of their work? Is it a question of publish and be damned? Or should the subject’s privacy always be respected? Tom Bower is the country’s bestselling biographer of contemporary public figures, renowned for his no-holds-barred approach. Michael Freedland has published several authoris...
Read More

Boris Johnson: The Gambler
Hero or villain? Maverick or chancer? In his latest book Tom Bower, described by Tatler as “the master of the unauthorised biography”, takes on the current Prime Minister. Based on a wealth of new interviews and research, he asks what his real achievements and failures were as Mayor of London, what influence the women in his life have had and why his story is ultimately overshadowed by family secrets. Bower is in conversation with the man who succeeded Johnson as editor of The Spectator, ...
Read More
Previous Contributor Next Contributor