Gamechangers, our exciting new online series in partnership with Kings Place, begins tomorrow and continues for the following five Mondays

Shimon Peres: An Insider’s Account
Tomorrow (11 January), 7pm (UK time)
Ambassador Avi Gil was Shimon Peres’ right-hand man through his time as Israel’s Prime Minister, Minister of Foreign Affairs and President. He joins us live from Israel to discuss his book on those decades in conversation with journalist Anshel Pfeffer.
Book now for this online event 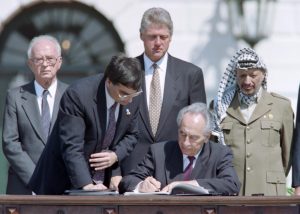 Harvard professor Michael Sandelhas followed his international bestsellers Justice and What Money Can’t Buy with a book that the Sunday Times says “will help us to heal our divided societies”. Live from the US the presenter of Radio 4’s The Global Philosopher will offer an alternative way of thinking about success – more attentive to the role of luck in human affairs, more conducive to an ethic of humility, and more hospitable to a politics of the common good. He will be in conversation with journalist and author Camilla Cavendish.

Book now for this online event

Upon her passing in September Helena Kennedy wrote of Ruth Bader Ginsburg’s “righteous but quiet anger that captured our hearts”. She joins a top panel for our online tribute, sponsored by the Kennedy Leigh Charitable Trust.
Book now for this online event
From our friends at the Jewish Review of Books
Register now for a webinar with poet and  literary critic Adam Kirsch discussing The Blessing and the Curse: The Jewish People and Their Books in the Twentieth Century with the magazine’s editor Abe Socher.
Friends & Enemies
1 February, 7pm (UK time)
In her memoir Friends and Enemies, the trailblazing journalist Barbara Amiel reflects on a life lived at operatic scale, with a cast including Henry Kissinger, Tom Stoppard and Ghislaine Maxwell, amid a backdrop that ranges from the newsrooms of Toronto and stately homes of England to the US correctional facility where her husband Conrad Black served time.  In this online event, in association with Jewish News, she will be in conversation with communications expert Zaki Cooper about her life, her Jewish identity and the books that have inspired her.
Find out more and book
Michael Rosen: On The Move
7 February, 11am (UK time)
Michael Rosen’s new, deeply personal poetry collection for children comes in four sections: his London childhood as part of a first-generation Polish family; perceptions of war as a young boy; his “missing” relatives and finally, global experiences of migration. He returns to Jewish Book Week after a sell-out appearance last year.
Find out more and book